Stop! Do you need to serve your neighbour a party wall notice?

Whether you’re planning a basement extension, a loft conversion, or you’re removing a chimney breast you must notify your neighbour before the works begin and obtain their permission for the works. If an agreement is not granted you need to obtain a Party Wall Award under the terms of The Party Wall Etc. Act 1996.

If your building works involve excavation works within three metres of the neighbouring property, the chances are that the Party Wall Etc. Act 1996 will also apply.

So what do you have to do?

“This Act has been in force for a number of years yet it is surprising how many people are still unaware of its requirements” comments Jon Ranson MRICS, MFPWS, Associate Director at Romans Surveyors, Chartered Building Surveyor, and Member of the Faculty of Party Wall Surveyors.

“You are advised to give notice to your neighbours a minimum of two months before it is intended to commence works, but in some cases it can take several months to conclude awards depending on the size of the project, so you need to bear this in mind during the project planning process.

“If you are in any doubt then speak to a surveyor as early as possible in order to avoid any issues or delays in the future.” 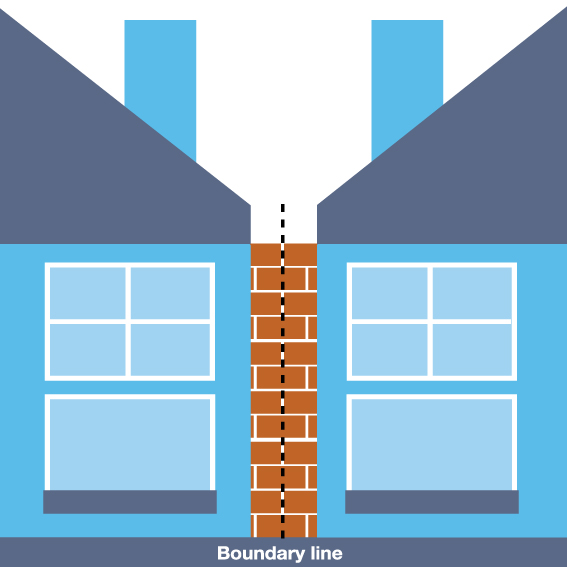 What is a party wall?

As explained on gov.uk, party walls stand on the land of two or more owners and either:

What works require a party wall?

You don’t need to tell your neighbour (the adjoining owner) about minor changes, such as plastering, adding or replacing electrical wiring or sockets, or drilling to put up shelves or cabinets.

What do the Party Wall Surveyor(s) do?

The appointed surveyor(s) effectively prepare and serve an ‘award’. This document explains what works will be carried out, describes how the work will be carried out and specifies any protective measures required to prevent damage. The award generally includes a record of the condition of the adjoining property, so that any associated damage caused by the works can be identified and damages fairly awarded. The appointed surveyor(s) undertake interim inspections of the work and at the end of the project sign-off the works as complete.

What happens when a party wall notice is served?

When a notice is served the adjoining owner has three options available:

If you are served a notice and you agree to the works you must provide consent in writing within 14 days.

Jon comments: “This is not always the best cause of action because often construction proposals at the time of issuing notice are not suitably developed and disagreements can occur at a later date due to misunderstanding of the proposals.

“It’s normally better to dissent the notice to ensure you have the protection of the Party Wall Act via an Award rather than relying on a personal claim if things go wrong.”

2.       Dissent to the works and appoint the Building Owner’s Surveyor as an ‘Agreed Surveyor’

If this happens the surveyor is duty bound to be impartial and appease the interests of both properties, which in some cases can prolong the process.

“This is suitable for simple party wall matters and offers cost savings to the building owner who otherwise may not be able to commence a construction project” adds Jon.

“The downside of this is that if there are concerns regarding the actions of the Agreed Surveyor there is no recourse other than to attempt to overturn an award in court, which can be costly and time consuming.”

3.       Dissent to the works and appoint your own surveyor as an ‘Adjoining Owners Surveyor’

This does result in increased costs to the building owner but offers all parties in the process the benefits of reference to a named Third Surveyor who arbitrates any disputes of the Act that arise.

Jon explains: “Although slightly more costly, this option often results in a quicker conclusion of party wall awards because the two appointed surveyors have a good understanding of the Act and work proactively. Above all two heads are better than one!”

Who pays the surveyor fees?

The building owner undertaking the work is normally responsible for covering all costs and professional fees associated with compliance with the Act.

The adjoining owner may have to pay a share of the cost if the work needs to be done because of defects or lack of repair. Or if they ask for additional works to be carried out that benefit them they will normally have a cost to pay.

“If the works commence without the agreement of the neighbour (adjoining owner) the neighbour can obtain an injunction to prevent the intended works taking place until such time as an award is made, causing serious delays to your plans” Jon comments. “You should also be aware that you cannot retrospectively obtain a Party Wall Award following the undertaking of works.”

Apart from issues of initial injunction obtainment, if you don’t obtain the necessary agreement or Awards with final sign-off then problems can arise during the resale of the property which could potentially result in a reduction of the agreed purchase price, or, in the worst case scenario, the sale falling through.

“If you’re in any doubt always seek the advice of a party wall surveyor as early in the project planning process as possible, in order to avoid any unnecessary delays and costs” adds Jon.

Romans’ surveyors offer specialist Party Wall advice to ensure compliance throughout London and the south East of England. To find out more please contact Jon Ranson on 01344 203567, or email jranson@romans.co.uk.