Are people really moving out of cities?

When the property market re-opened after the first lockdown, reports started coming in that people were leaving the cities and heading to more rural locations. Personal stories about the desire to secure more space inside and out, live a quieter life and be closer to family have appeared almost weekly in the press.

This is backed up by research carried out by Rightmove in the summer of 2020. Their data showed that enquiries from city residents about village homes rose by 126% in June and July versus the previous year, with city dwellers in Liverpool, Edinburgh, Birmingham and London topping the list of those dreaming of a rural life.

Are people really moving out of cities in their droves or is it just hype?
Well people are moving, but certainly not in vast numbers, with the data showing that city life is still a popular choice for many. According to a survey by the London Assembly Housing Committee, 14% of people want to leave the capital because of the pandemic and 33% of Londoners want to move to a new home.

Of those that want to move, while 46% are looking outside London, almost as many (43%) are keen to remain in the city. Not surprisingly, the survey highlighted that having a private outside space – such as a balcony or garden - and being near to parks are now high on buyers’ lists of wants for their next home.

The Rightmove survey shows a similar pattern across the rest of the UK. In Glasgow, there was an equal increase in the number of searches for properties in towns as in villages, while in Leicester, people were actually more likely to search for a town rather than a village. In most cases, people weren’t looking to move too far afield with the majority looking to stay at least in the same region.

Statistics from reallymoving show that “the median distance moved by UK homebuyers in 2020 was 10 miles, an increase of 1 mile from the 2019 average”. And comparing Land Registry data for September, October and November 2020 with the same three months in 2019, only the South East showed a significant increase in the proportion of all moves in the UK, rising from 16% to 18%. 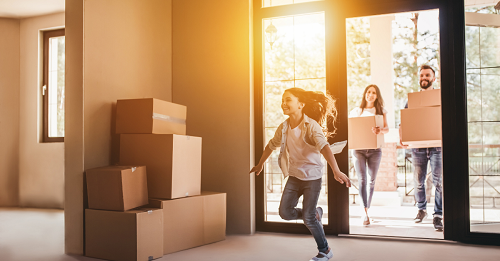 A huge exodus has yet to materialise!
While it’s true that increasing numbers of people are researching moving to more rural areas or further away from the hustle and bustle of their existing home, we aren’t yet seeing this convert into actual moves on a mass scale.
And although it’s been reported that some cities have seen a drop in demand that’s led to rents and prices falling, what we’re actually seeing is an increase in supply. For example, in London a lot more property has become available in the long-term lettings market due to serviced accommodation switching tenures.

We also don’t yet know whether people who live in major cities and are currently working from home will have to return to work in the coming months. Many people, of course, can’t work from home and the latest ONS statistics show that at the start of January nearly half the workforce was still commuting during the lockdown.

Some companies, including PwC, Microsoft and Schroders, have already advised their employees they will have much more of a choice about working from home, while others, such as Goldman Sachs, have been clear that they expect their staff to return to work as soon as it’s safe to do so. Given that it seems likely most people will have to physically be in the workplace at least part-time, it remains practical for them to live reasonably close, suggesting that an ‘exodus’ from cities on a huge scale is unlikely.

Renters seem to be keeping things balanced…
A recent Rightmove article has shown Central London is seeing a surge in popularity among tenants. A fall in average monthly prices in the capital since the pandemic has given people the opportunity to relocate to previously unaffordable areas before rents rise again. All 10 of Rightmove’s top rental hotspots in London for March are in Zones 1 & 2 – a big contrast to last August, when 8 of the 10 were outside Zone 2.

At the same time, Rightmove has also seen an increase in the number of city tenants enquiring with agents about properties in less urban areas. London has shown the biggest increase, from 45% in 2019 to 53%, while in Edinburgh, 37% of renters have been searching for a new home outside the city, up from 29%.

In the latest Zoopla UK Rental Market Report (published February 2021) it demonstrated how some cities, such as Manchester, Leeds and Birmingham, were experiencing a ‘halo effect’ where commuting zones are the outskirts of cities where experiencing notably stronger rental demand than the central zones themselves.

For example, the report showed that rents in central Birmingham (local authority) fell by -3.4% in the year to December 2020, but average rents across neighbouring boroughs, including Bromsgrove, Sandwell and Wolverhampton, rose by an average of 5.3%.

What is expected to happen next?

Whether the current high level of home moves across the UK will continue or start to subside is so far an unknown. The recent positive budget for buyers and sellers, with the extension of the Stamp Duty Holiday in England and Wales (LTT) and the re-introduction of 95% mortgages to help those with a 5% deposit get on the ladder, is expected to continue to drive the market upwards this year.

The rental market is looking equally buoyant, and a lot of people’s decisions on where to rent next will ultimately depend on how things pan out once lockdown eases more, and whether the option to work from home continues in the same way.

Whatever happens, the reality is that in most areas we consistently see demand higher than supply and a continuing upward trend for prices and rents.

So, whether you’re looking to find your new home or investment property, in the centre of town living or a bit further out in the country, get in touch and we’ll do our best to help make your dream a reality.